Itinerant collective exhibition that represents a visual journey through the last eighty years of photography in Spain, from the outbreak of the Civil War to the present day.

the exhibition is organized by Acción Cultural Española from the book published by Signo Editores en 2017.

This exhibition is an extension of the book 50 Photographs with History. In a different format, but keeping the essence; graphically recompose the evolution of photography in Spain through stories, sometimes unpublished or not well told, but necessary to know. 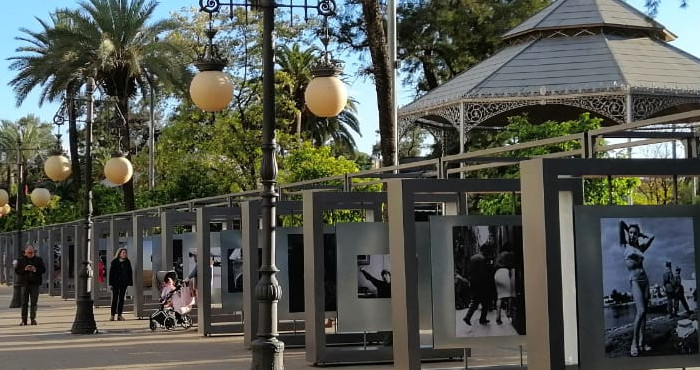 The exhibition also goes through the rise of documentary design and the look of Spanish authors abroad that begins in the 90s and continues to this day with key authors such as Cristina García Rodero, Navia, Isabel Muñoz or Sandra Balsells.

A proposal that reviews the looks that mark the photographic actuality of Spain and the narrative richness resulting from its history. Among the selection of photographers are 17 National Photography Awards and 2 National Plastic Arts Awards.

The exhibition is organized by Acción Cultural Española based on the book published by Signo Editores in 2017.

For each photographer, a unique look. For every look, a story that deserves to be told.

“50 photographs with history” proposes to the reader a journey through eighty years of this artistic discipline in Spain, in which they are from the masters of the first decades of the twentieth century to the most current proposals, prioritizing at all times the analysis of the photographer’s gaze and the historical context in which these images were taken. A book that has the work of selection carried out by José María Díaz-Maroto, and of writing and layout by Félix Fuentes, together with the team of Signo editores.

Fifty fundamental authors in the history of photography in our country gathered in a book with more than 100 images and additional material that will provide data of interest to the reader, and that will help him to know more in depth what is behind each of the photographs.

A blue Chevrolet, a dancing couple and the boardwalk in the background were enough for Mellado to make one of his best-known photographs, and as he himself acknowledges, of his ten favorites.

Now you can know the story as it happened…. 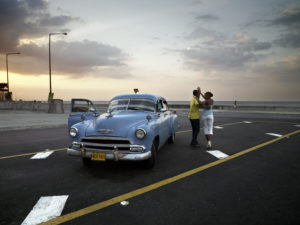 There is an old debate among photographers that has both supporters and detractors. Should a photographer always carry a camera? To give us an idea, the American photographer Walker Evans, in the fifties of the last century recommended his students to always carry a small camera hidden among the clothes “as if it were a gun”. Just in case…

We all know that what happens around us is very ephemeral and that one of the main concerns of photographers is to have to face a world in perpetual change and with infinite combinatorics. What if I leave the house without the camera and miss the photo of my life? it’s the question that’s in the head of more than one photographer.

They also know that many of their photographs are judged by their ability to make the right decisions in a very short time.

Now   a photographer takes pictures in two ways: with the camera (the most obvious) and with the look (if you do not have the camera on you). In this second case it remains as a discomfort, something inside that then has the need to share with his fellow photographers: “the other day I was walking down the street and suddenly it happened … It was the perfect photo!”. He would have been able to make a pact with the devil to freeze the moment aware that today there is no “chip” that allows us to record what we see.

In the story we’re going to tell now there’s a little bit of this. And also something else.

José María Mellado (Almería, 1966) is a photographer who is widely known for his research in the development of digital archives. José María Mellado has published several books on photographic technique and has developed his own method for developing digital files. Thanks to them he has managed to create a work, almost always related to the landscape, in which the hand of man always appears. Roads, industrial fumes, … reminders that humans are present in every corner of the planet.

The technique with which Mellado interprets his landscapes helps him to create photographs, through a certain use of color, which gives his photographs a rather overwhelming appearance. Somehow Mellado has used his research to create a photographic form that helps him tell things the way he is interested in telling them.

In this sense he is not the first to apply his research to his photographic language. Authors such as Ansel Adams and Fred R. Archer,creators of the zone system, did it before  him  But Mellado, in addition to creating a very recognizable photographic form is also one of these photographers who believes that you do not always have to carry a camera. And with this conviction he landed in 2006 in Havana.

And on one of his first walks along the city’s Malecon he comes across this scene: A magnificent blue Chevy parks in front of him. Quite a spectacle. Then, as in an even more difficult one, the car doors open. Loud music that comes from inside, and a couple that comes out of it and starts dancing. This as soon as you arrive in Havana!

José María is speechless. Timidly and like a stone guest approaches the couple and articulates a few words. “I have just arrived from Madrid and I was very surprised that you start dancing here, is this for something?” They look at him. “Ah, no, no, we were just happy, we stopped and started dancing. And now we’re leaving, like that, without further ae.”

José María senses that something is slipping through his fingers. “Would you mind meeting tomorrow afternoon and having a picture taken?” “Of course not.” They answer. “Okay, see you before sunset. See you tomorrow.”

Already with his Haselblad camera around his neck, at sunset the next day he goes down to the Malecón, thinking that perhaps they would not even appear. But at the scheduled time they arrived, parked and did the same. He made several shots of which he chose this one. The one that combines the yellow of the boy’s sweater with the line of the ground and her clothes with the blue of the car.

The result is this recreation of life. A photograph that Mellado recognizes that he would place among his ten favorites.

A copy of this photograph ended up being purchased by the Chazen  Museum  of Art in Wisconsin and is in its permanent collection. For this reason and thinking that the dancers would like to know that they were in a museum in the United States José María tried to contact them. Unsuccessfully. The phone number he had been provided was of no a help. It had changed. Something that seems to be very common in Cuba. Because it seems that there everything is stubborn in being alive on the fly. And this for a photographer who does not carry a camera on him is an additional complication.  However,  Mellado in this photograph captured what cannot be staged without losing it: human life.

The poet Yeats said how it was possible to distinguish the one who dances from the dance. This couple from Havana has been forever entangled in a  dance at sunset, the time when Mellado, the engineer of training accustomed to working with a rigorous methodology, has placed them forever.

In conclusion, an essential book for those people, amateurs or professionals, who are curious to know the anecdotes and circumstances that surrounded the best known Spanish photographs.